Last year Nitish Rana represented India in one ODI and 2 T20 matches. But, since then he has been away from the team. Currently Syed Mastak Ali.. 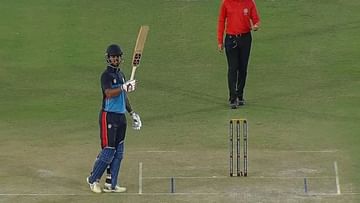 Cyclone batsman Nitish Rana, who has been waiting to return to Team India, caused a stir on Wednesday. He scored a century in Syed Mushtaq Ali Trophy 2022 in just 55 balls. In an Elite Group B match for Delhi, he scored 107 off 61 balls with 9 fours and 7 sixes against Punjab. Nitish is looking forward to his return to Team India. He was dropped from Team India after just 3 matches.

Nitish represented India in 1 ODI and 2 T20 matches last year. But, since then he has been away from the team. Talking about the Syed Mushtaq Ali Trophy match between Delhi and Punjab, Delhi lost 2 wickets for just 10 runs.

After losing 2 wickets in the beginning.. Captain Nitish Rana created a sensation and increased the score to 183 runs. Siddharth Kaul struck the third blow for Delhi by bringing captain Rana to the pavilion. After this, Yash Dhul reached 191 runs with an innings. Dhul scored an unbeaten 66 off 45 balls.

At the same time, in another match of the tournament, Amit Mishra, who was ignored by the IPL teams, created havoc with the ball and won the team by 83 runs. Mishra gave away 10 runs and took three wickets. Batting first, Haryana scored 136 runs for the loss of 7 wickets in 20 overs. Haryana batsmen suffered a heavy defeat. Rahul Tewatia scored the highest 35 off 19 balls. Rajesh Bishnoi from Meghalaya took 4 wickets for 12 runs.

The Meghalaya team, which went to chase the target, could not stand up to Mishra’s destruction and collapsed for 53 runs. Five batsmen from Meghalaya could not even open an account. Amit Mishra has been a part of Delhi for a long time. But, no franchise showed interest in him in the IPL 2022 auction.